This is a blog about painting (when isn’t it ha!), but its also a question or ponder on numbers. I am enamoured of one and three and seven for some reason. One is the whole, the circle, complete, closed, sun and moon. Three is balance, triangle, ancient symbol of spirit and unity, the trinity, starry, sharp, fulcrum, stable. Seven is mystical, magical, lucky, superstitious, dwarves, seventh son of seventh son, witches and wizardry. And all are prime numbers.
And how does this relate to painting? Only in a coincidental way:

I have been making a triptych (3 canvases that form one piece, I think, more later)
The paintings starting point was the view of the mountains on the road home from Letterkenny a few days ago. It was raining and the mountains were swathed in low cloud. Only really Muckish visible.

So I primed my 3 canvases, starting with a dark blue/purple that would eventually be revealed by solvent dribbles and scratches through the upper layers. Then a blue/turquoise. First photo:

The next day I added some green and a yellowish grey. This was printed over the top, by applying with a squeegee to grease proof paper on a rough textured surface, the pressing the mottled paint onto the canvas and smoothing over. Then some mark-making and ‘revealing’ with solvent to show the dark blue from underneath:

Meanwhile I was also working on a few small paper pieces, using the same colours and processes as I went along, and trying out some mark making too. The marks in these 2 are suggesting Muckish half covered in cloud. Incidentally these 2 are already sold!

The next day I felt that the works lacked depth somehow, and also I didnt like how the colour ‘blocks’ formed an unattractive lumpy ‘horizon line’ accross the 3 canvases. Maybe they aren’t one work but 3. So I separated them slightly. Then added some new colours, ochre and a darker grey, and rolled over the whole effect, making it more homogenous in the process

Ok, so back to the question of one or three or seven. As I separated the 3 canvases, I was thinking about 3 sisters, myself and my 2 older sisters in my 3 child family, and the ‘3 sisters’ of the 3 canvases, separate as well as connected. Then I remembered that the range of mountains on the road home from Letterkenny has 7 peaks, known affectionately as the Seven Sisters. They are Errigal, Machocht, one whose name I dont know, the 3 Aghlas and Muckish at the end. We can see Errigal and the Aghlas from our house.

So, these are either one work or three connected works, inspired by and featuring the seven sisters

a stark reminder to me of the freedom I have to paint in the light, thanks

Julio Cesar Osorio completed a degree in photography and digital imaging in 2000, but it was at age 42, whilst serving a two and a half year prison sentence, that he began to paint.  Art became a means of coping with prison life and Julio now promotes the positive effects of art alongside others he has met via the Educational Prison Alumni Trust, inspiring other prisoners to follow the same path.  You can see from this series of collaborative articles what a creative and resourceful individual Julio is, and also how, despite limited, cramped circumstances, a dedicated, resilient person can find a means to creating great art.

Originally Julio and I intended to collaborate on a single article, but I find his words so compelling that I was reluctant to edit them down, so the story will instead be told in a series of fragments. Here, we focus on light.

my exhibition at An Grianan Theatre, Letterkenny, County Donegal, Ireland opens at 7 on 23rd September and runs till 21st November

black cow 6it *sigh*)cm sq (undercoating was similar, not shown)

‘artists working from inner necessity’, I like that very much, congratulations, Rick, on a great new blog, I will be following you avidly, thank you

a 5m bolt of coarse jute, 160cm wide, has led to some fun
here are some images, process and completion, of the 4 pieces I have made so far:

Great commentary on Bacon with paintings I’ve not seen before, thanks

Bacon and the Masters, Norwich (UEA)

Afraid this exhibition is now finished – I got to see it in its last week – so its a bit redundant now to review it.  However, I’m rather redundant myself, so here’s a few words.  First, I have to take issue with Jonathan Jones’ assessment in the Guardian; he thought the “Masters” (Matisse, Rembrandt, Velasquez, Van Gogh, Bernini et al), whose works Bacon used as  templates or providers of inspiration, actually made Bacon’s efforts look rather “silly”. His previous admiration for the British painter evaporated in the presence of the Masters.

There is no doubt that the Rembrandts are striking and the terracotta Bernini torsos staggeringly powerful, even though small; my feeling is, however, that Bacon’s work stands up well and does justice to those whose works he used – or rather, the photographs of them, since he famously avoided seeing the originals. 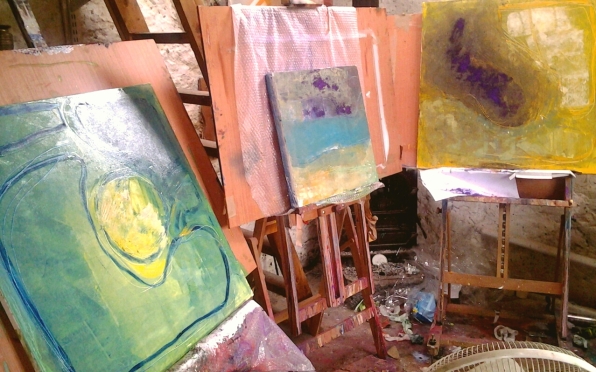